Use non-random IDs for untitled posts in blog stats

The screenshot shows a portion of my blog stats. Some of the entries with random strings as IDs, such as bxhos3tmmz1666gh, are for posts with no titles like this, others for comments I posted on other blogs via Remark.as. 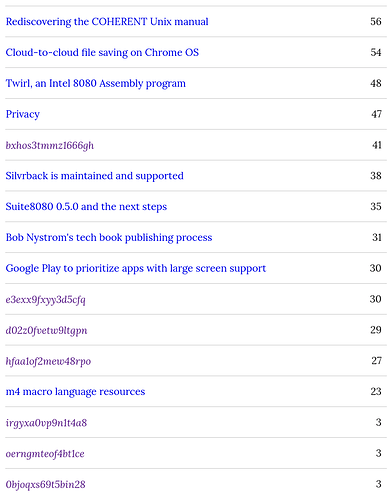 Would it be possible to replace the random strings with readable IDs that make it easy to figure which posts they refer to? The IDs could be the first few words or the slug for untitled posts, the first few words for comments. The system already stores at least the readable slugs.

The random strings make it difficult to figure which entries refer to which posts, a scheme that doesn’t scale to many posts. Although I can click the random IDs to view the corresponding posts, this likely adds spurious views to the stats.

This change definitely makes sense. Check out your Stats page now – I’ve just updated it to show parts of the post when there’s no title explicitly set.

It looks great now, thanks.