Response Posts for Discussion Between Authors

What does everyone think to using response posts as a form of discussion between authors?

My suggestion would be to use tags as references to locate responses.

Tags could be topic-specific, or just a general response to a given author #RespUsername

It provides an indirect method to exchange responses without being targeted for engagement like on social media. Unlike “@-mentions”, response tags will not show up automatically anywhere. Nor will the original author be notified.

Update: code to test this idea can be found here.

Interesting idea, though I can see an issue with people using custom domains for their blogs. If you don’t know an author’s alias because they are using a custom domain, how do you decide what the response hashtag should be? We’ll need to come up with a standard for this so that everyone will generate the same hashtag when responding to one author.

Sorry I thought I was presenting an alternate solution, but it seems to be more complicated than the original idea haha. I think this highlights the need for Remark.as to allow responses or maybe a webmention implementation for this platform.

I hadn’t thought of custom domain URLs at all — duh!

A simple workaround would be to publish the Write.as URL on the site’s about page, or at the bottom of posts you are seeking responses to.

Remark.as will surely take some development time. It would be good to have something in the meantime. Also, a response post is typically more extensive than commenting.

As someone who has informally responded to other’s Write.as posts in the past, this is a great suggestion @nibl ! I particularly like how it works subtly - remaining in the background but great if you want to see who’s responding to your posts.

To formalize this, we could always see who would want to be involved in these kind of discussions. If they want such interactivity, they’d be allowed to chose which hashtag they want to responses to go to. That way we can avoid problems with custom domains and let it be by choice of the author rather than guesses. This hashtag can be displayed in the About page on a Write.as blog. It’d just have to be emphasized that the response can only be seen if the post is made on a public blog (ie: published to Read Write.as).

I can also imagine these response hashtags being on a separate blog (or post) that works like a directory/blogroll of sorts, connecting a response hashtag with a Write.as blog (ex: CJ Eller - blog.cjeller.site - #cj). That way people can see which blogs have hashtags and can post response posts for discussion knowing that the author is open for responses.

Would love to see more thoughts on this and to perhaps get something going soon!

I like this idea. Do you mean there could be a central directory at e.g. “responsetags.write.as” or better rsvp.write.as?

Wondering how people might add their tags to that site. Hmm, what if authors placed their response tags on their about page and the page was scraped, and added to the directory?

We would just need to agree on a syntax, e.g. “ResponseTag: #cj”. The rest could be built from scraping that off each blog’s about page.

A simple mechanism could be added to the setup procedure for Pro blogs. Authors could toggle a response-tag switch on/off. By default the response tag could be auto-filled, when toggled “on”, as their username or blog alias. They could edit the name in the blog’s settings. That could be parsed and added to the directory, and maybe an about page auto-generated with the tag if the page doesn’t exist.

Alternatively, instead of the about page, there could be a kind of widget added to the bottom of blog posts. This widget could have a yes/no toggle. Set to No it would display “Do not want responses to this post”. If set to Yes it would say ”Responses wanted to hashtag xyz”. The hashtag would be auto-filled from the blog settings.

I also like the idea of having a page that has a listing of blogs/sites and their corresponding response to hashtags.

I think for us to end up with a standard for this, we need to get more user input… How do we get more people to share their input on here? I suppose we can write a post that can be shared on the read.write.as feed that will point to this thread. It would be even better if we can pin that post to the top of the feed.

I wrote some javascript to automatically insert one’s preferred response hashtag below posts, including the option to skip responses for individual posts.

I will post the script after I’ve made it a little user friendlier.

Here are the screenshots for both cases. Let me know what you think to it. 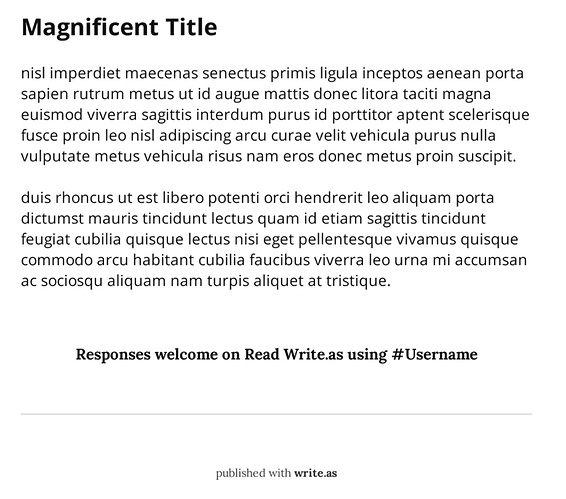 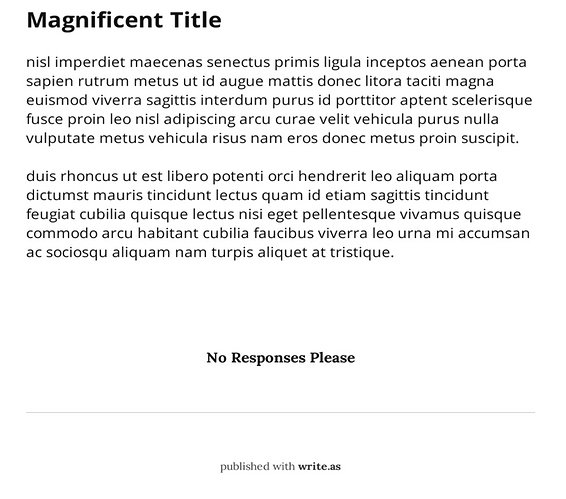 Really like the idea of a post footer @nibl! Constant reminders would be great. I could also imagine there being something that people can add into their blog’s footer - a link to the aforementioned directory. This strikes me as a similar practice to how a lot of webrings organize (one example and another).

I think for us to end up with a standard for this, we need to get more user input… How do we get more people to share their input on here? I suppose we can write a post that can be shared on the read.write.as feed that will point to this thread. It would be even better if we can pin that post to the top of the feed.

Definitely agree with you @dino. We can also write about it on our personal blogs and just start practicing this. Curious what other people think (@matt, @sfss, @bugbuster).

Curious what other people think

I think this is a nicely thought-out idea by @nibl, giving complete control to the blogger as to which hashtags to use, either by manually inserting or using the forthcoming js code by nibl, or by communicating a no responses messages. As @cjeller1592 mentions, it can be used right now without anything further needing to be implemented.

This is a read.write.as idea/solution, there are a few limitations I can think of off-hand regarding WriteFreely. No javascript support on WF, so the @nibl code wouldn’t work, though of course the hashtag could be manually inserted. Also, as far as I know, there is no overall WF reader, as there is with read.write.as. Each WF instance has a reader, and this hashtag technique could be used for that instance, but AFAIK a hashtag wouldn’t be discoverable across WF instances. Is this right, or does someone know otherwise?

Regarding hashtags in general: I think a nice-to-have feature would be some sort of enhanced hashtag discovery mechanism. I know of two useful, partial attempts at this: (1) a glitch app by @cjeller1592 to list the hashtags in use by a specific blog, https://wa-tags.glitch.me/, and (2) read.write.as has a pinned header list of 4 trending hashtags among all reader posts. It would be nice to have a link that displays a more complete listing of hashtags in use.

Here is the code. The hashtag link is now clickable so you can quickly view responses and visitors can read how others have responded. Give it a try and let me know if it works for you. Instructions are included as comments in the code.

I like the idea of creating web rings. They are really useful for discovery of small groups without being overwhelmed by huge content offerings. As a reader I find them most useful with the classic left and right arrows in the footer. It’s nice to discover sites by moving from one to the other.

Is there a plan to add per blog custom footers? That said, a web ring would require a Javascript snippet anyway.

Here is the code. The hashtag link is now clickable so you can quickly view responses and visitors can read how others have responded. Give it a try and let me know if it works for you

Ok, I tested the @nibl javascript code on a new temp blog and it works. A test blog post is at https://tempblog.writeas.com/response-hashtags in case anyone wishes to post a response.

Important Reminder: For this to work, the Preferred URL in your blog’s Customize page must be in the format <blogname>.writeas.com, NOT write.as/<blogname>. That is a system requirement for javascript to work.

@nibl, I just noticed one little response test situation: the responseno line shows in the post on the read.write.as listing page. Perhaps one way to make it not show is to use the <!–more–> feature to display only that text which is above the responseno line. 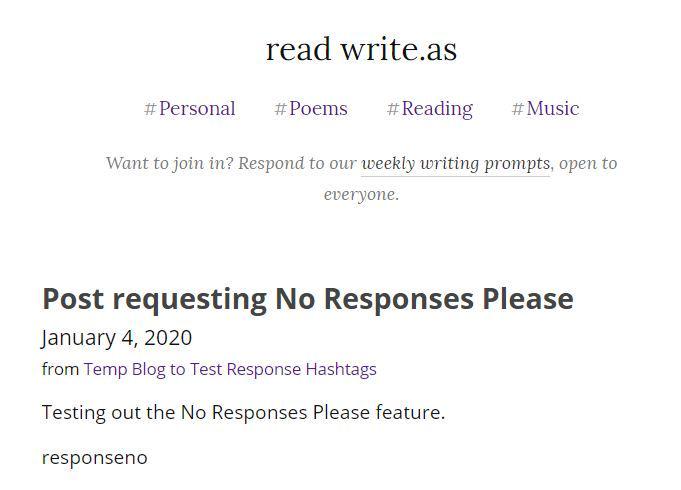 Thanks @bugbuster, good catch! I was hoping someone would do a real test with it. It looks to me as though posts are truncated after five lines on read.write.as. So the responseno keyword would only appear on very short posts. I will add your suggestion to the script instructions.

I had considered asking people to place the “responseno” keyword below <!—more—> because that would have halved the amount of necessary code. But then I thought maybe some people want to have their entire posts readable on their homepage.

Oh, and I didn’t know blogs needed to use a Write.as subdomain for Javascript to work. That also needs adding to the instructions.

I didn’t know blogs needed to use a Write.as subdomain for Javascript to work

Yeah, I had forgotten about that and after creating the test blog, the js code didn’t work since I hadn’t initially configured the blog to use the writeas.com subdomain setting. Then I remembered about it and after that change the code immediately worked perfectly.

Many thanks for your js coding on this. Not only is this a useful technique for those interested in a response dialog, but it also is a good reference illustrating some techniques for how to do certain useful things with js on the write.as platform.

Thanks for your test post so we can see if everything works as expected.

Your post on tinkering.writeas.com included the #responsetest hashtag and therefore anyone going to https://read.write.as/t/responsetest could follow that discussion thread.

For your own blog’s Test 1 post on tinkering.writeas.com, your response hashtag has an issue:

If you really intended the response hashtag to be #Tinkering, you should replace username in the javascript code with tinkering.

If that’s what you intended, it would be interesting to see what happens if you change the javascript code accordingly: as I understand it, that javascript change will then be automatically reflected in any future reads of the original post on your blog and also on read.write.as. But it would be good to verify that.

Hey there, good call and thanks for the clarification: it wasn’t intended, nope. Editing the code now.

Not knowing Javascript, I wonder if what you describe would be the end result if I change the code accordingly.

Will ask the question to a buddy.

@sfss @bugbuster It will show the most current link in all your old posts too. The script runs each time the page is loaded. It’s dynamic, as opposed to static.

I can make a separate variable where you only need to enter the hashtag name. I guess most people probably don’t want to edit the rest of the inserted text. That will be simpler for most people.

I believe read.write.as is also dynamic because otherwise edits to your posts would not be reflected there.