I have a question regarding the twitter cards. I did find a similar post [SOLVED] Twitter Cards for links which discussed the same thing. I read it, but it seems the last post there mentions this is now supported, I just don’t get why it looks different. 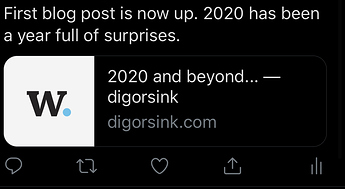 But how can I get it to look much better like this: 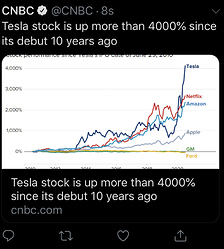 I was doing some googling and found this post https://www.quora.com/How-do-you-tweet-links-without-having-the-link-in-your-tweet which talks about the site itself has to be coded for twitter.

After some reading around the internet including the Twitter Developer API, I was able to figure out what needs to be done in order to have the different styles of Twitter Cards.

My issue now is how to accomplish that on Write.as because the change I need to make is in the <head> tag.

I tried using the JS approach to replace the tag, but it doesn’t seem to be doing anything:

I’m wondering if the code does not work in this case because what I am trying to change is a meta property in the <head> tag versus something in the <body> tag.

I think you’re right @digorsink — I put a variation of your code onto my blog and saw the changes reflected in the <head>. But when I sent a post over to Twitter, it didn’t use the _summary_large_image card. My thinking is that this is something on the platform level rather than something that can be changed with Custom JavaScript. Would be curious about @matt’s take on this too.

Yeah, I’m thinking it may have to do something with the way pages are usually rendered. Typically the head tag is processed before the body tag as it should. That is why it is called head. So in theory Twitter is already pulling in the head tag meta data before the body even loads (in-fact, Twitter api may not even be looking at the body)…meanwhile the JS script I added is most likely being processed when the body loads which allows it to be ignored by twitter. So it would have to be done at the platform level to have that twitter attribute in there as a static value instead of trying to do it dynamically.

I was thinking through how this could be implemented if Matt decides to add it to the platform.